The Dominican Church of Santa Maria sopra Minerva was erected on the site of an ancient Roman temple, the dedication of which had been wrongly attributed to the pagan goddess Minerva. According to recent research, under the church there are ruins of the temple of the ancient Egyptian goddess Isis.

The construction began in 1280 and lasted for 90 years. Now it is one of the most beautiful Gothic basilicas in Rome. On the right side of the facade you can see water level marks of the Tiber river during the floods: the oldest is from 1422 and the highest is from 1548. 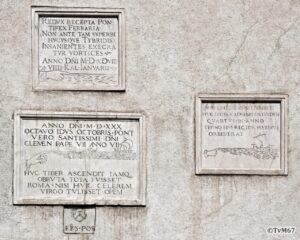 Water lever marks on the facade

In front of the church there is a sculpture by Bernini depicting a marble elephant with an ancient Egyptian obelisk on its back. It was installed by order of Pope Alexander VII in 1665. The obelisk also once stood on the territory of the temple of Isis, and was specially brought from Egypt as an ornament by Emperor Diocletian. 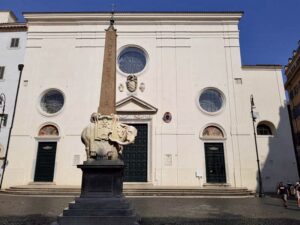 Sculpture by Bernini with an Egyptian obelisk

The basilica of Santa Maria Sopra Minerva is remarkable for the fact that it regularly held rituals of denying heretics their ideas. The words of the great Galileo Galilei, “And yet it moves”, were pronounced here. Saint Mary above Minerva Basilica hosted two conclave ceremonies (election of the new Pope).

The church‘s interior is decorated with numerous frescoes, and near the altar one can see the sculpture of “Christ Carrying the Cross” by Michelangelo himself. Originally Christ was unclothed, but priests considered it too revealing and ordered his hips to be hidden under a bronze floating loincloth. 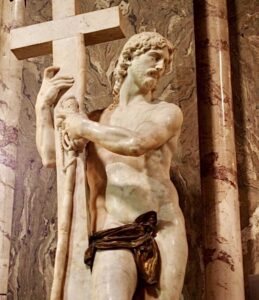 Christ Carrying the Cross by Michelangelo