𝔸ℝ𝔸 ℙ𝔸ℂ𝕀𝕊
🕊Ara Pacis is the name of the Altar, built between 13 and 9 BC, which symbolized the era of peace in the Mediterranean after numerous wars, particularly those conducted by the Emperor Octavian Augustus in Spain and Gaul. The Altar of Peace is considered part of a large complex of monumental structures erected by the Senate in the Campo Marzio area (Field of Mars). 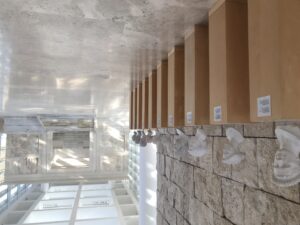 🕊In ancient times soldiers of the sacred Roman Empire were trained here. The opening ceremony was held on Augustus’ wife’s birthday, Livia. Ara Pacis is a unique marble structure, which had a ritual purpose. It was used for public feasts, traditional rites and sacrifices. The building is located near the Tiber River, the flooding of which raised the surface level around the Altar, hiding it for many centuries under a layer of sand and silt.
🕊Some fragments of the artifact were accidentally excavated only in the XVI century. The restoration work was carried out until 1937. That year marked the 2000th anniversary of the birth of Emperor Augustus. Having excavated all 53 fragments of the Altar, however, due to the lack of information about its original view, they could not join the pieces together for a long time.

🕊As a source of information about Ara Pacis 2 coins from the times of Domitian and Nero were used, which depicted 2 different sides of the Altar. After the reconstruction in 2006, Ara Pacis is kept inside a glass pavilion. Its ancient Roman statues are illuminated by projectors that overlay colored images on the bas-reliefs of the members of the imperial family, creating a beautiful 3D effect.
🕊 guide in Rome | rome tour | rome walking tour | Vatican tour | rome guided tour | rome travel guide | rome guide | travel guide in rome
By Maria|2020-10-02T06:49:44+00:00October 2nd, 2020|Uncategorized|0 Comments